This feature is part of Chuck’s Story, a series chronicling the life of Williams-Sonoma founder Chuck Williams, who passed away on December 5th. This post comes to us courtesy of Laura Martin Bacon, a writer, creative consultant and Chuck’s longtime friend. When Chuck Williams recounted the story of his first trip to Europe back in 1953, he would always smile and get a faraway look in his blue eyes—and you could tell that he was recalling all the wonderful dishes he was introduced to back then.

Before that trip, Chuck had only traveled as part of the war effort, but now he was hungry for the adventure of experiencing the world during peacetime. In the spring of 1953, Chuck and two of his friends made the transatlantic journey to England aboard the SS Île de France, then motored around the continent exploring Europe’s great cities, from Barcelona and Brussels to Copenhagen and the fabled City of Light. “We wanted to visit as many countries as possible,” Chuck said. “In fact, I saw more of Europe on that trip than I’ve seen since.” In those days, Chuck would tell you, many Americans were drawn to the delights of Europe. In the preceding decades, pleasure travel had been curtailed by severe economic depression and war. Now, postwar America was experiencing a peace and prosperity that inspired a fresh wave of European tourism. “The dollar was strong, so it was cheap to go to Europe in those years,” he recalled. “You could buy a second-class passage on a ship for maybe $250, round trip. And it didn’t cost you much to travel once you got there. So Europe was becoming attractive for Americans.”

According to Chuck, these first-time travelers to Europe were often motivated by an intellectual and cultural curiosity that reflected America’s growing awareness of French cuisine. “It wasn’t just tourists going there to look at tourist sights. They were intensely interested in the country and its history. If they liked to eat, it was especially interesting to them.”

Chuck had always described himself as someone who likes to eat—and Paris lived up to his every expectation. “Early on my first morning, near my hotel, I found a small bakery, where I purchased two croissants—the first I had ever tasted—and took them to the bar next door to enjoy with a café au lait. Sitting at a table outside in the sunshine, I savored my debut breakfast in Paris. I was in heaven.” Chuck on a stroll through Paris. Photo courtesy Chuck Williams

One day, after hours of exploring the city, Chuck found himself in the bar of a crowded café, when he ordered what he calls a “stand-up meal”—just a ham sandwich and a beer. “The sandwich consisted of a generous segment of a crisp baguette, sliced in half horizontally, with a few curls of chilled sweet butter and two thin slices of jambon de Paris in between,” he recalled. “To this day, I remember how delicious that simple combination was.”

In the following days, Chuck said, “I had many other firsts, all of them memorable.” In addition to his first crêpe, first soufflé and first quiche, he savored his first explorations of the Parisian food markets. Chuck sampled the delicacies at Fauchon and tasted the bounty of fresh foods at Les Halles, the eight-acre open-air marketplace that was the city’s main market until its demolition in 1971.

Chuck’s strolls through the neighborhoods of Paris also revealed the city’s celebrated bistros, the cozy neighborhood restaurants that had originally become popular during the 19th century, when many Parisians regarded them as an extension of the family home. Decades later, Chuck was still telling fond stories about those bistro dining rooms, where handwritten menus featured the plats du jour (daily specials). He loved peeking into the bustling kitchens, where cooks might offer him an impromptu cooking lesson or demonstrate how to use a tool Chuck had never seen before. One of the things that impressed Chuck was the exceptionally high quality of French cooking, which was obvious in even the most humble meals.

“In some ways,” he said, “it reminded me of our family kitchen when I was a boy. There was no nonsense about what went on in my grandmother’s kitchen, and no nonsense about what went into it. It was all about good, basic cooking using good, fresh ingredients.” Chuck’s grandmother, who had spent years in the restaurant business, helped him appreciate top-quality kitchen equipment as well as great food.

It’s not surprising that Chuck was fascinated by E. Dehillerin, the legendary Parisian kitchenware emporium founded in 1820. Wandering through its aisles was a revelation, as Chuck discovered the vast array of specialized equipment that was readily available to professional chefs and home cooks alike. 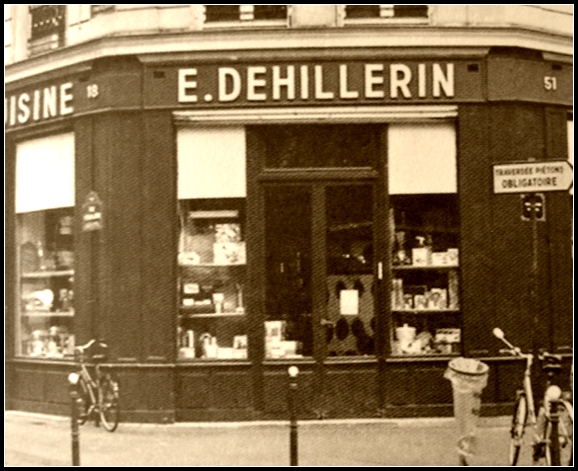 In the 1950s, Chuck says, most American kitchens were outfitted with a few basic pots and pans. But in Paris, Chuck found everything from brioche, tart and soufflé molds to customized tools and copper cookware of every shape and size. “Knowing how to cook myself, I loved looking at all the pots and pans and was amazed that everything was available there for everyone.”

Looking back, Chuck always described that first trip to Paris as one of the great turning points of his life.

“I really never got over that trip,” he often said. “And all these years later, I know that every trip to Paris I’ve taken since then has been an extension of that first one back in 1953—after all, it’s what gave me the idea to start my own kitchenware shop.”

[…] traditions of France. Which only makes sense, given the heritage of Williams-Sonoma: After all, it was a trip to Paris that first gave Chuck Williams the idea to open his own kitchenware shop in America in […]

[…] As you may know Chuck Williams passed away yesterday. It’s undeniable that he and Julia Child were both responsible for “translating” and educating French cooking tools and techniques for American audiences. I love this article!! […]